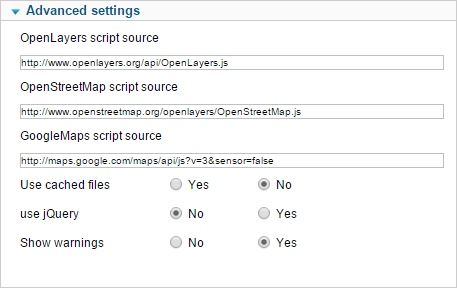 Here you can specify the URLs from where GPXTrackMap pulls in the scripts it needs to display the map.

By default, the OpenLayers API is pulled in directly from OpenLayers.org - see here why this is not always a very good idea (look for "Don’t hotlink your OpenLayers" down the page).

To make your map display as independent as possible of other servers, you should download OpenLayers.js and put it on your own server - preferrably inside the /plugins/content/gpxtrackmap directory. After you have done that, change the "OpenLayers script source" setting to:

(replace "localhost" with your own server name). Advanced users can compile own, smaller versions of OpenLayers.js to reduce the size.

Similarly, you can download the OpenStreetMap.js file here and also put it on your own server. This is just a small file containing the layer definitions for OSM maps in OpenLayers.

So if you have downloaded it and put it in your GPXTrackMap directory, you can change the "OpenLayers script source" setting to:

(same as above: replace "localhost" with your own server.)

This is a bit different: i'm NOT encouraging you to download the Google Maps™ API(!!), i don't even think it is allowed(!). This is here just in case Google™ should change their URL or calling syntax so you can adapt it here.

The plugin will normally generate the ZIP and SVG files from the track only once, and then use these files in subsequent calls. If you have modified a GPX file, you should temporarily set this option to No, reload the page with the map on and then turn the cache option back on.

If you use the plugin with Joomla! versions > 3.3.x, there is a chance that the mootools library (which was used in earlier Joomla versions) is not available. If so, try setting this option to Yes.

NOTE i have received reports of the plugin not working correctly with newer versions although "Use jQuery" was set to "Yes". This most likely has to do with other plugins/components/templates bringing their own version of jQuery. This other version could interfere with the plugin. All i can confirm is that it works on a "clean", empty Joomla 3.3.6 installation with no other plugins installed...

The plugin will generate warning messages if it detects that something is wrong - for example: GPX track not found, unknown parameters or presets used, or missing Write privileges in the GPX track folder (Write permissions are required to generate the ZIP files and SVG's for elevation and speed diagrams).

With this option you can turn the output of those warnings in your article on or off.